Also in this bulletin: from the Academy to the ABC, a host of prizes; join Nature’s promotion of Australia’s science capital; and Alan Duffy on our training

Power and wealth untold—not quite—but the Prime Minister’s Prizes do wonders for your altmetrics. It’s time to put forward your unrecognised leaders and your rising stars.

Nominations are sought from industry and academia for the two major prizes worth $250,000 each and the $50,000 early to mid-career awards. It’s easy to nominate online and winning one of the awards really can be transforming.

“Winning this award is the single best thing that has happened in my career, and it clinched the success of my application for promotion to Professor,” says Angela Moles from UNSW of winning the 2013 Frank Fenner Prize for Life Scientist of the Year.

For Rick Shine, winning last year’s Prime Minister’s Prize for Science helped raise public awareness of his work protecting native animals from cane toads and helped him to secure more funding. And for Ingrid Scheffer, who won the top prize in 2014 along with Sam Berkovic, the award secured her place as a sought-after speaker on her research into epilepsy and on the topic of women in science. 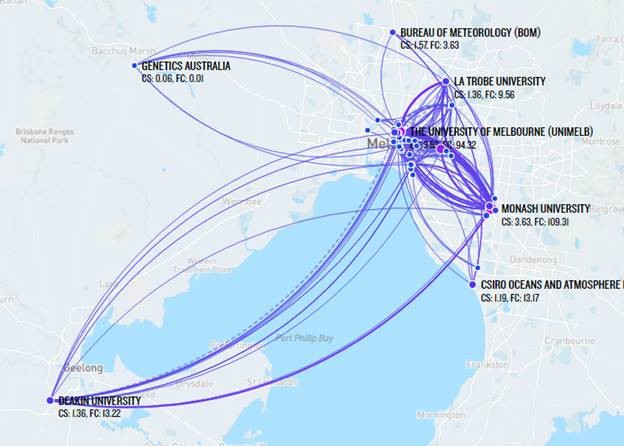 Nature is organising an international promotion of Melbourne’s research leadership.

The project is supported by BioMedical Research Victoria. There are opportunities for advertorials, adverts and job adverts. If you’d like to participate please let me know on niall@scienceinpublic.com.au or 0417 131 977.

Has your team got an exciting discovery, invention, or other news you’d like to celebrate?

Consider taking part in the 2017 edition of Stories of Australian Science, our online collection and annual print publication bringing together discoveries, prize-winners and top achievers in Aussie science. We will be sharing the 2017 print edition with journalists and TV producers at the World Conference of Science Journalists and the World Congress of Science and Factual Producers later this year.

We also have media and communication training workshops for scientists coming up on:

As astrophysicist and one of our media training alumni Alan Duffy says, “I gained experience in different media formats, such as radio and TV, with practice interviewing, and invaluable coaching in how to tailor my message that I use to this day.”

Also in this bulletin:

Make sure great Australian science, innovation and science teaching is recognised—nominate for the Prime Minister’s Prizes for Science

Each year the Australian Government honours Australia’s best scientists, innovators, and science teachers through the Prime Minister’s Prizes for Science.

But we need your help to find the humble science heroes, promising early-career researchers, media-shy innovators, and modest teachers who deserve to have their work recognised on a national stage.

And if you know a great science teacher…

The awards will be presented at a gala dinner in the Great Hall of Parliament House, Canberra, where the leaders of science, industry, education and government will have the chance to meet the recipients.

It’s simple to nominate in the first (shortlisting) stage, with an online form. If a nomination is shortlisted, further material will be required in the final stage.

To read more about past recipients and the awards dinner visit: www.science.gov.au/pmscienceprizes.

Stories of Australian Science 2017: put your science in front of those who matter most

Stories of Australian Science is used by journalists, 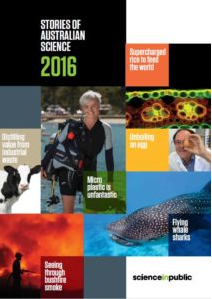 scientists, politicians and science policy-makers, as a useful reference for keeping up-to-date with new and exciting developments in Australian research.

The 2017 print edition will be promoted to delegates at the World Conference of Science Journalists in October and the World Congress of Science and Factual Producers (TV producers) in late November, both in San Francisco.

If you’d like to have your research or the work of your scientists/institution featured, contact Lydia on lydia@scienceinpublic.com.au or call the office on (03) 9398 1416.

All we need from you are a couple of dot points and some contact details. We’ll interview the key scientist/s then write and edit the stories, running them by both the commissioner and scientist so you’re happy we’ve got the facts right.

We’ll print 15,000 copies and distribute them to journalists, scientific researchers, politicians and science policymakers as a useful reference for keeping up-to-date with new and exciting developments in Australian research.

We’ll share them on social media, and put them online where users can search by field of science, state, institution or key word to see the science stories that have been included in the current year and previous years. And everything we write is available for you to use in other publications.

Prices start at $1,200 + GST for a single story, and are discounted for multiple stories.

More details at stories.scienceinpublic.com.au/submission. You can read the 2016 edition here.

Understand your audience and pitch your story

We offer a flexible range of training programs to help your researchers understand their audiences, the essence of their story, and how to build their profile with the audiences and stakeholders that matter for their projects and for their long-term career development.

“The biggest prize I received as a Fresh Science finalist was intensive media training by Science in Public,” says astrophysicist Alan Duffy. “I gained experience in different media formats, such as radio and TV, with practice interviewing, and invaluable coaching in how to tailor my message that I use to this day.”

For more information on a bespoke course, visit www.scienceinpublic.com.au/training or call us on 03 9398 1416.

We also hold regular media and communication training workshops around Australia, for scientists and those who communicate science.

In 2017, our media and communication training courses for scientists will be in:

Registration is now open for all courses via EventBrite.

In these courses, we’ll help you shape the story of your research into a form that works for the media, as well as for government, industry and other stakeholders. The day’s insights and training will help you feel more comfortable in dealing with journalists when media opportunities arise.

Nature is organising a major promotion of Melbourne’s research leadership.

The project is supported by BioMedical Research Victoria. There are opportunities for advertorials, adverts and job adverts. If you’d like to participate please let me know on niall@scienceinpublic.com.au or 0417 131 977.

The interactive map will reveal:

You’ll be surprised by some of links.

This updateable map will be based on publications in the top natural science journals tracked by the Nature Index website (www.natureindex.com), the open access platform owned by Springer Nature, publisher of Nature, with data published under a creative commons license.

The online map will be launched together with the NatureJobs Career Guide on Melbourne, to be published in the 18 May issue of Nature and distributed at the 2017 BIO International Convention in San Diego (19-22 June). The map will also carry a feed of jobs and events in Melbourne from NatureJobs.

The map will later be expanded to include articles from the more than 60 clinical medical titles expected to be added to the Index towards the end of 2017.

You can get a flavour of the map from the 2016 Nature Index and the screenshots below. 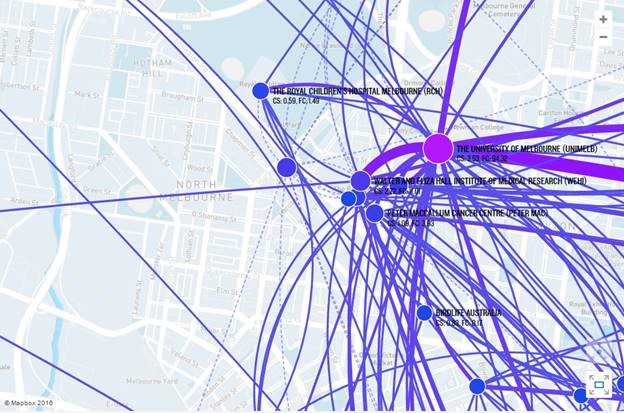 Other prizes, funding, and opportunities

The CRC grants support industry-led and outcome-focused collaborative research partnerships between industry, researchers and the community.

The 2017 BioMelbourne Network Women in Leadership Awards are open. Launched in 2015, these awards celebrate, honour and profile outstanding women in the biotechnology, medical technology, pharmaceutical and health innovation sector.

The awards are open to candidates from member organisations of the BioMelbourne Network.

Full details regarding the nomination process, eligibility, criteria and nomination forms are online at biomelbourne.org/women-leadership-awards

Help recognise the science leaders in your organisation by nominating them for the Australian Academy of Science’s honorific awards.

The Academy’s honorific awards are open to senior scientists as well as early and mid-career researchers who are making amazing contributions to Australian science across a range of disciplines in the physical and biological sciences.

For further information and distribution you can download the awards poster. You can also read more about the awards and the Academy’s opportunities at www.science.org.au/opportunities.

Applications are now open for Top 5 Under 40, an initiative to discover Australia’s next generation of science communicators.

The winners will undertake a two-week media residency in Sydney at ABC Radio National, supported by UNSW.

Early-career researchers under 40 who are working in Australian universities and research organisations across science, technology, engineering, mathematics and medical research are encouraged to apply.

Known as the ‘Oscars of Australian science,’ the Australian Museum Eureka Prizes celebrate research, science communication and journalism, leadership, and students. Finalists will be announced online on July 28, and winners at a gala dinner on August 30.

Contact me to find out more about our services to train, mentor, plan and deliver media and communication strategies for science. We offer:

Communication plans, mentoring and training
We can review your stakeholders, messages and tools and help you and your communication team refine your plans. We offer this service for individual announcements or for a whole program or institute.

Media releases, launches, and campaigns
We can help you develop an outreach program, from a simple media release through to a launch, a summit, a conference, or a film.

Publications and copy-writing
From a tweet to a newsletter; from a brochure to a Nature supplement, we can write compelling and accurate science-driven copy which captures the essence of your story and purpose.
Kind regards,
________