Posted on behalf of Rob Robinson, President of the Australian Institute of Physics

This year we are celebrating the United Nations International Year of Crystallography, marking 100 years of using X-ray diffraction to study the structure of materials. There’ll be all kinds of events: the public art exhibition Crystals in the City will tour Australia in August, and the AIP and ANSTO will host a public talk on crystallography in May.

And then 2015 is the International Year of Light. The theme of “light” encompasses so much of physics, so it gives us all a chance to shine in public. Our colleagues at the Australian Optical Society will lead the way, and anyone with ideas for the steering committee can email light2015@aip.org.au.

Michio Kaku – you may know him from his books and TV programs. He’ll be visiting our shores in June, with public talks in Brisbane, Melbourne and Sydney discussing and answering questions on his speciality, string field theory, and his attempts to unify the fundamental forces.

Thanks to Elisabetta Barberio, who brought the Higgs boson to schools and universities across Australia as our 2013 Women in Physics lecturer.

Applications for the 2014 tour are open until 31 March: it’s a great opportunity for a woman who’s made a significant contribution to physics research to share her work.

Remember too that the AIP medals and awards are open, recognising research, education and service to physics.

Now is a good time for award nominations, with the prestigious Prime Minister’s Prizes for Science also open—including the Malcom McIntosh Prize for Physical Scientist of the Year, won last year by Andrea Morello—as well as the honorific awards from the Australian Academy of Science.

And for those keen to hear from some young high-flyers, the FameLab Australia state heats will feature early-career researchers talking about their science before a live audience, in plain English and with only 3 minutes each. These events will take place around the country over the next few weeks, and there’s sure to be some physicists involved.

On a sad note, former AIP President Fred Smith passed away from cancer on 1 March. Fred was instrumental in setting up the Federation of Australian Scientific and Technological Societies, which is now known as Science and Technology Australia, and he was its first president.  He was a long-time Professor of Physics at Monash University, before moving to La Trobe in 1987 as Deputy Vice Chancellor (Research).

The AIP’s database, financial and membership services will soon be provided by Professional Association Management Services.

They are taking over from Waldron Smith Management, who have served us well for many years, including organising the 2010 Melbourne and 2012 Sydney AIP Congresses.

The changeover will start on Friday 21 March and should be complete by Tuesday 1 April. Although we’re trying to make the process as seamless as possible, there will inevitably be some differences, so please bear with us.

The new contact details for the AIP will be:

2014 is the United Nations International Year of Crystallography, commemorating a century of X-ray diffraction, which made possible the study of crystal structure. (It’s also just over 400 years since Johannes Kepler made his first observations of the symmetry of snowflakes).

Of course, here in Australia we’ve been celebrating for some time our own connection with William Henry and William Lawrence Bragg, who received the 1915 Nobel Prize for their work. This has included the Bragg Symposium in Adelaide in 2012, special-issue Australia Post stamps, and a video hookup between the Australian Synchrotron, ANSTO and facilities in Grenoble, France, in December 2013.

But this year brings even more ways to celebrate, including Crystals in the City, a public display of person-sized crystal structure models, designed to reflect their surroundings and build awareness of the achievements of Australian crystallographers. It will appear in all Australian capital cities from 9–30 August 2014.

There will be many other events and activities, with public lectures in Melbourne in March and May. And naturally the AIP will be doing its bit, with a lecture at ANSTO on 17 May on crystallography and the Australian Synchrotron.

To find out more about what’s going on around the world, you can check out the International Year of Crystallography website, and of course we’ll be putting Australian events into the AIP calendar.

Remember to submit your nominations for the AIP medals and awards to Olivia Samardzic, olivia.samardzic@defence.gov.au, by 31 May 2014.

The AIP President will present these prizes at the 2014 Congress in Canberra in December, along with the Bragg Gold Medal for the most outstanding physics PhD thesis.

The Bragg Medal has a separate nomination process, with entries submitted by Australian universities to their state AIP branch.

Further information on all the awards can be found on the AIP website. 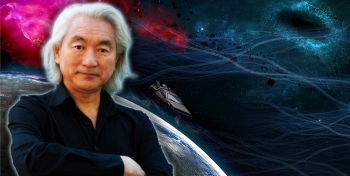 American theoretical physicist and best-selling author Michio Kaku is coming to Australia this June for a series of public talks about string field theory and the multiverse.

With a 60 minute “fire-side chat” followed by 30 minutes of Q&A, he will explain how string field theory extends Albert Einstein’s legacy by combining the theory of general relativity with quantum mechanics, all with the goal of uniting the four fundamental forces of nature.

As a well-known science communicator and radio and TV presenter, Dr Kaku is sure to pitch his presentation at a general audience, suitable for anyone looking for a fresh perspective on the world as we know it.

Bookings are open now for talks in Brisbane on 5 June, Melbourne on 6 June and Sydney on 7 June. Dr Kaku’s visit is organised by Think Inc., who aim to promote rational thought and smart discussions through a platform that is both educational and entertaining.

Plasma physicists are invited to join a newly-formed division of the Association of Asia Pacific Physical Societies (AAPPS).

This is the first specialised division for the association, building on the success of the plasma science program at the AAPPS conference in Japan in July 2013. The hope is to have a similarly strong program at the next conference, which is to be held in Australia.

It will cover everything related to plasmas, including fundamental plasma physics, plasmas in astro, solar and space physics, the Earth dynamo, accelerator physics, high-intensity laser plasma science, magnetic and inertial confinement fusion, and engineering applications such as plasma processing, medicine and propulsion.

Membership is currently free. You can find out more at aappsdpp.org/AAPPSDPPF.

Michael S. Fuhrer from Monash University will try to give a sense of why graphene, a single atom-thick plane of graphite, has sparked, and continues to generate, such excitement in the condensed matter physics community.

The AIP Education Committee is keen to assist new physics teachers with a full day in-service.  The event is free and travel coverage is available for country participants..

The Australian Synchrotron in the International Year of Crystallography

Andrew Peele will discuss some of the outstanding science produced at the Australian Synchrotron that was made possible by the work of “Australia’s” W. L. Bragg.

Signs of inflation and gravitational waves

Nominations are open for Australia’s top awards for science and science teaching, including the Malcolm McIntosh Prize for Physical Scientist of the Year.

Nominations for the Australian Academy of Science honorific awards for scientific excellence are open until 17 April 2014.

Hear young researchers communicate their science to a live audience.

Researchers from the Universities of Wollongong and Sydney have created high-capacitance yarn that could be used in wearable technology.

Mature galaxies in the early universe

Astronomers from Macquarie and Swinburne Universities have found massive galaxies with old stars only 1.6 billion years after the Big Bang.

In this podcast, Ullrich Steiner explains how the structure of materials produces the vibrant colors seen in many butterflies and beetles.

John Macfarlane, the book review editor for Australian Physics, is seeking volunteers write a short review (300-500 words) of one of the following books:

Nambu: A foreteller of modern physics

Microcosmos: The world of elementary particles

Living in a warmer world

If your review is accepted for publication you may keep the book for your own use.

Max Thompson: VCE Lecture 3 – When I was very young: Misconceptions in Physics
Thu, 20 Mar 2014, 6pm
Laby Theatre, School of Physics, The University of Melbourne
For students and teachers