Australia-Indonesia focus – a series of stories on how Australia and Indonesia are helping each other to grow sustainably.

And we’ve had polymer banknotes, penicillin and crystals that clean water, but what will the next decade of chemistry in Australia look like?

More on these below.

You may have noticed we’ve got a bit of an Indonesian flavour at the moment. We’re highlighting a series of projects from the Australia Indonesia Centre.

From health and education, to infrastructure and food – Australian and Indonesian scientists are joining forces against some of the biggest challenges facing both nations.

And Australia could learn a thing or two from the speed and scale of Indonesia’s infrastructure development.

Indonesia’s massive economic growth is placing huge requirements on the nation’s infrastructure, including ports and transport. And President Joko Widodo has big plans for 24 new ports over the next four years, along with thousands of kilometres of road and rail.

Both countries can improve efficiency and accessibility for goods and passengers to move between land and sea. The Australian and Indonesian governments have recognised railways, roads, and ports as important areas for investment over the next 20 years.

We’ll be bringing you these stories over the next few weeks, as well as research into improving access to healthcare, and helping both countries to design and build more energy-efficient houses.

For more information, contact Lydia on lydia@scienceinpublic.com.au or +61 457 854 515 as I’m still making my way back from the AAAS Conference in Washington DC.

Scientists available for interview in Bahasa Indonesia and English.

Local fishermen in Indonesia are catching less fish. Whatever the reason, it is a significant problem for those who live on small islands in particular, as fish make up about 90 per cent of the protein they eat.

A team of Indonesian and Australian social scientists is looking at how communities adapt to these changes. Initially, in a pilot project study financed by the Australia Indonesia Centre, the researchers are examining whether there is a link between fishing productivity and feelings of food insecurity in the small islands off Kai Kecil, and if so, whether a weakening of local management of fish populations and a rise in intercommunity conflicts over fish resources play a role. The researchers are also studying how individuals cope with food insecurity, and attitudes to alternative ways of making a living.

“There are a lot of small islands in the world,” says project coordinator Dr Budy Resosudarmo of the Crawford School of Public Policy at the Australian National University (ANU).

“And Indonesia is a good case for this issue. If we can find out how to handle this, maybe we can provide answers to the rest of the world, particularly the islands of the Torres Strait and the Pacific Ocean.”

The collaboration has been able to draw upon resources of two universities in Indonesia, Hasanuddin in Sulawesi and Pattimura in the regional capital of Ambon; the Tual Fisheries Polytechnic in Kai Kecil; and from two universities in Australia: the Australian National University and the University of Tasmania, where there are experts in fisheries economics.

“The two local institutions are important as they have been working in the area continuously, so a lot of background information already exists,” says Budy. “They can provide us with literature on local fisheries management, for instance, where each village decides and enforces its own seasonal or species restrictions.”

The team has been updating this information using what they call a ‘rapid rural appraisal approach,’ visiting the villages, talking with the heads and the local people, observing what is happening, and checking whether the questions they propose asking in a forthcoming questionnaire are relevant and will provide them with meaningful information.

The bulk of the initial phase of the study will involve analysis of the information gained from the questionnaire, including questions on food security, impressions of fish stocks, fishing productivity, fisheries management, conflict and attitudes to alternative livelihoods. The questionnaire will even carry queries about electricity issues and supply which will provide information to another Australia Indonesia Centre project on remote electrification. Electricity is important to fishing communities for the production of ice to preserve their catch.

Originally planned to be held in November, the questionnaire has had to be postponed until February 2016 because an early start to El Niño brought high waves to the area increasing the dangers of sea travel and the level of boat maintenance for locals.
Budy believes that alternative livelihoods, such as switching to other fish or marine resources or supplementary occupations, are likely to turn out to be short term solutions of limited appeal to local fisherman. A longer term bet, in his opinion, would be a willingness for fishing families to put more money in educating their children so they can take advantage of other job opportunities, but he has little idea of how fishing people would feel about this strategy.

Another area being explored is forging stronger regional connections through modern transport.

“Improved transportation could create a better flow of goods and services, and that could generate the possibility of great trade with the rest of the world and a bigger market for Australian agriculture, in particular,” Budy says.

Riding the rails to an efficient freight system

Scientists available for interview in Bahasa Indonesia and English. 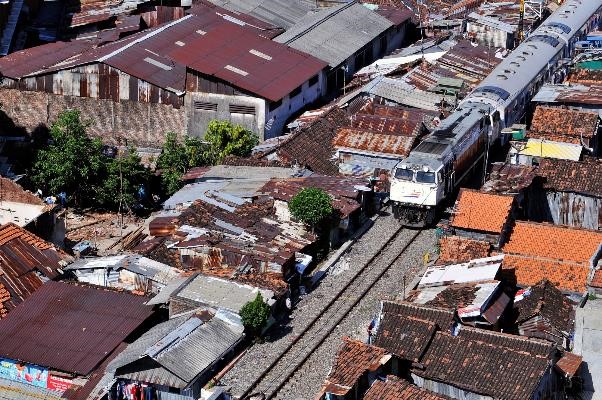 From 2016 a specially-equipped standard railcar will be rocking and rolling along the tracks of East Java. It will have carefully positioned sensors to detect its movement during normal operation, including its displacement and vibration.

The railcar instrumentation has been designed by Monash University’s Institute of Rail Technology (IRT) to provide data on the condition of the track and the response of the rolling stock. This will allow engineers to accurately estimate safe loads and running speeds. It’s part of a project financed by the Australia Indonesia Centre to facilitate safe and efficient movement of freight across the rail network, and particularly to improve the movement of goods into the new container port terminal at Teluk Lamong (Lamong Bay), Surabaya.

“There are many trucks and buses jamming up roads at the moment,” says project co-leader Dr Hera Widyastuti, of the Sepuluh Nopember Institute of Technology.

“If we don’t start getting this under control then it will bring about many issues. Improving the railway systems would reduce congestion and have economic impacts way into the future – we could transport goods much more smoothly, and reduce pollution and accidents.”

“As far as ports in Indonesia are concerned,” Chiu says.“The use of rail transport as a more efficient way of moving goods from one point to another should be explored. How to use the current railway network safely and efficiently, and the potential of re-activating other existing rail assets are important questions.”

“The Institute of Railway Technology (IRT) has an excellent record in delivering tangible benefits from rail -related projects in Australia and overseas,” says Chiu.

“They developed the instrumented railcars currently operating in various parts of Australia and in Brazil, and were recently awarded the national Business-Higher Education Round Table 2015 Award for Best Research and Development Collaboration.”

Rather than instrumenting the track at several locations to monitor its status, the instrumented railcar monitors and provides condition reports along the whole length of track. The data can be used to determine safe maximum running speeds along each segment of track for a particular load.

The researchers would also like to determine where lines need to be upgraded, and how much work it would take to bring decommissioned or unused lines back into service.

“Our research aims to examine inactive railways to see whether it is still possible to reactive them and determine what repairs are needed,” Hera says.

Energy, health and sustainability – how chemistry will shape the next decade in Australia

These are just some of the big challenges that chemists in Australia will be tackling according to a decadal plan released by the Australian Academy of Science this morning.

The report calls for stronger collaboration with industry (which chemistry is already well positioned to do). It also highlights the challenges of gender equality and attracting top students to the field, and the need to improve the public perception of chemistry.

I’ve included the Academy’s media release below and President Professor Andrew Holmes is available for interview along with the chair of the plan’s working group Professor Paul Mulvaney. Read Paul’s piece for The Conversation here.

Australia’s opportunity to create a bright future through Chemistry

Media release from the Australian Academy of Science

Improving chemistry research and education will be vital in supporting future industries, according to a new plan for the future of chemistry in Australia.

The plan, developed by the Australian Academy of Science’s National Committee for Chemistry, envisages improved links between chemistry researchers and industry, as well as better quality school and tertiary chemistry education in Australia.

Advances in chemistry currently underpin more than $24 billion of Australia’s economic output, and more than 60,000 people are employed in the chemical industry.

“Chemistry is the central science. A vibrant chemistry community in Australia that is fully engaged with industry will be vital to addressing some of our key challenges, including increasing agricultural productivity, developing new life-saving drugs and creating novel sustainable materials,” Academy of Science President Professor Andrew Holmes said.

“We already have great chemistry expertise in Australia that bridges materials and biological sciences. Now is the time to start really taking advantage of this knowledge to drive new ideas and economic development,” Professor Holmes said.

“This is the first plan of its kind that brings together the chemistry community to consider the discipline as a whole and look at what it can offer Australia.”

The report also outlines strategic goals for chemistry, including improving teacher expertise, strengthening links between industry and the chemistry research community, and creating a positive image for chemistry.

Chemistry for a Better Life: the Decadal Plan for Australian Chemistry 2016-25 is available here.