Corals already have the genes to adapt to warmer oceans: a study published today in Science by researchers from the Australian Institute of Marine Science (AIMS) and international collaborators shows a genetic basis to temperature tolerance in coral. And it likely depends on ‘mum’s genes’.

Full media release below, and you can access it along with background information, high res images and underwater footage of the reef at www.scienceinpublic.com.au/marine

Mark your diaries: National Science Week is coming up from August 15th – 23rd, Australia’s annual celebration of science and technology. We’ll be helping to promote the best stories and talent of the Week.
Here’s a taste:

Hundreds of events are registered, with dozens being added daily.
Organisers will register local event details online at www.scienceweek.net.au/ and we’ll let you know about events and stories relevant to your round/area.

Corals already have the genes to adapt to warmer oceans

Townsville and Texas researchers discover a genetic basis to temperature tolerance in coral. And it likely depends on ‘mum’s genes’.

A team of Australian and US scientists have discovered that corals already have the genes to tolerate global warming. It may only be a matter of shuffling them to where they are most needed.

Migration and breeding may allow coral to adapt to hotter oceans, and offer a path for smarter reef conservation and restoration, according to a paper published today inScience by researchers from the Australian Institute of Marine Science (AIMS) and the University of Texas at Austin. 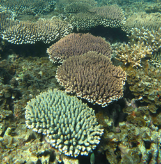 The team crossed individuals of branching coral Acropora millepora (pictured on right) from the far northern Great Barrier Reef with members of the same species at Orpheus Island, 540 km further south. They found that corals living in warmer waters on the north of the Great Barrier Reef pass on higher temperature tolerance to their offspring.

The study also suggests that ‘Mum is best’: coral larvae had up to a ten-fold increase in their chances of surviving heat stress, of which five-fold was contributed by the mother. A possible explanation was provided by genetic analysis: tolerant larvae had altered expression of genes working in mitochondria, the powerhouses of the cells that are inherited solely from mothers.

“This discovery adds to our understanding of the potential for coral on the Great Barrier Reef to cope with hotter oceans,” says Dr Line Bay, an evolutionary ecologist from AIMS in Townsville and joint senior author on the paper (picture shows Line at work in the Far Northern Sector of the Great Barrier Reef).

“Averting coral extinction can begin with something as simple as exchange of coral immigrants across latitudes, which will happen naturally through larval dispersal but can be jump-started by humans moving adult corals,” says Mikhail Matz, a professor of integrative biology at the University of Texas at Austin and co-lead author. “This is occasion for hope and optimism about coral reefs and the marine life that thrive there.”

Before such steps are considered we need to learn much more about coral adaptability to be able to discriminate between ‘winners’ and ‘losers’ in the game of climate change. One of the first tasks would be to confirm the role of mitochondria in heat tolerance, which was suggested for the first time by this study.

This study is part of a broad body of work at AIMS into the ability of coral and coral communities to adapt to a changing climate and to cumulative impacts of stress factors such as heat, ocean acidity, sediment, and water quality.

This study was supported by funds from the US National Science Foundation and the Australian Institute of Marine Science.

Tweet
Looking for fresh, young researchers with a story to tell
Corals already have the genes to adapt to warmer oceans