One suicide every 40 seconds – Movember marks Suicide Prevention Day with a powerful video in which men read from their own suicide notes. More below.

We spend millions of dollars training great minds in science. Then we lose half of them when we fail to spend just a bit more to help them stay in science.

A national conference in Melbourne will discuss progress in the campaign for equal opportunities for women in science.

Amongst their challenges: there have been a proliferation of projects in STEM, STEAM, STEMM, etc. Which have the scale for real impact? How can we get sustainable change? More at womeninscienceaust.org/national-symposium.

Sarah and I are in town training scientists. Join us for a beer, cider, or dinner at the Brown Fox in West Perth from 6pm on Tuesday 13 September.

Explore a universe of colour, reverberation, particles, and impermanence through dance, with the immersive physics-dance performance Metadata. The performances will be followed by a cosmology Q&A with the artists and Sydney Uni physicists Maryanne Large and Geraint Lewis, where they will discuss recent science developments in the context of the performance. More here.

Coming up in October: 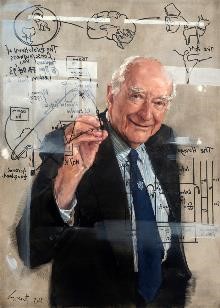 He said, “Derek founded the Florey decades ago and pioneered research on salt, thirst, and how the brain wires instinct. He has continued to publish front line research well into his 90s. Recently he isolated the site of drug addiction, being the same as where thirst is controlled – hence its powerful influence.

He has been an entrepreneur forever and has persuaded the aristocracy of Australian enterprise to donate to science on a scale few have matched.

He is a fellow of all the top academies, including the Royal Society of London where his portrait hangs.

He and his wife Maggie [ballet dancer Margaret Scott] are the only couple I know who are both AC [Companions of the Order of Australia].”

The portrait was painted by Evert Ploeg who in 1997 attempted to enter the Archibald Prize with his portrait of the Bananas in Pyjamas, later purchased by the ABC. His portrait of Deborah Mailman is one of the most popular paintings in the National Portrait Gallery collection and his portrait of Jana Wendt won the Packing Room Prize in 2004.

Other scientists in the Gallery include: 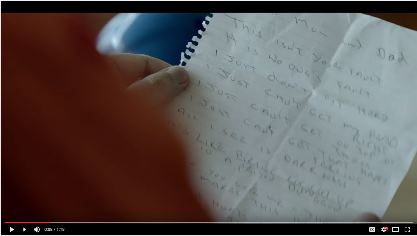 Around the world, on average, we lose a man to suicide every minute of every day. This is a social crisis that demands our immediate action.

The Movember Foundation have produced a powerful video message to help give male suicide the urgent attention it deserves and to take a bold stand towards protecting men’s health.

It features the stories of men with a personal experience of suicide. They are the most powerful voices in suicide prevention – they truly understand the challenges and are proof that there is a brighter future ahead.

They say “It’s all about igniting conversations. Important conversations about suicide, the complex issues that surround it, and what everyone can do to address it. Conversations that we hope will save countless lives and prevent the far-reaching and painful consequences for the families, friends, and communities of the men we tragically lose every day. It’s an uncomfortable conversation, but it’s one we know we need to have.”

Tweet
New physics research centres, and Congress deadline extended: physics in October
Last call for wildlife spotters; innovative kids off to Silicon Valley; and who will win the Prime Minister’s Prizes for Science?