This year’s Eureka Prize finalists are available for interview.

They’re teaching Northern Territory quolls not to eat cane toads, have invented a system to store solar power throughout the night, and they’ve presented the first science event for the Sydney Gay and Lesbian Mardi Gras. More below.

The 2015 Eureka Prize winners will be announced at a grand dinner at Sydney Town Hall. The top science photograph for 2015 will also be revealed.

Also on until Wednesday

How do you get sperm from a saltwater crocodile? What can we learn about male infertility and ovarian cancer from hairy-nosed wombats, koalas, and egg-laying mammals? What triggers preterm birth, and is BPA making kids fat?

We’ve collected the media highlights of a reproduction conference that kicked off in Adelaide on Sunday. It’s running until Wednesday.

Leading endocrine and reproduction experts will be sharing their work at the Annual Scientific Meeting of the Endocrine Society of Australia and the Society for Reproductive Biology (http://esa-srb.org.au). More below.

On Wednesday night we’ll find out who will take home a coveted Eureka Prize.

The 2015 Eureka Prize finalists have invented:

View information about all 49 finalists at australianmuseum.net.au/2015-finalists-eureka, including video footage of each entry.

The 16 winners will become available for interview as the prizes are announced – from about 7.30 pm to 10 pm AEST Wednesday 26 August – get in touch if there are any finalists or winners you’d like to talk to.

You can also follow along on Twitter @EurekaPrizes and #Eureka15 where the winners will be announced the moment their names are read out on stage.

Three images are finalists for New Scientist Eureka Prize for Science Photography and are available for publication.

Seven more photographs were highly commended by judges, and all 10 images are online at australianmuseum.net.au/2015-new-scientist-eureka-prize-for-science-photography  and are available for publication. Contact us for high-resolution versions.

Here’s one of the finalists:
Saltwater Crocodile, Justin Gilligan 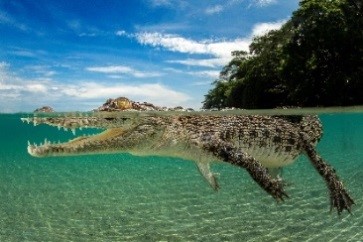 Exploring the coral reefs of Kimbe Bay in Papua New Guinea is like being caught in a literal time warp, where the hours pass by like fleeting moments. For Justin Gilligan, this juvenile saltwater crocodile presented the perfect opportunity for a close encounter on a glistening natural stage. When taking this stunning image, Justin focused on the raised eyes and nostrils and the camouflaged skin – all adaptions this crocodile needs to live a life both above and below the water’s surface.

The winners of all 16 prizes will be announced in the presence of over 650 science, government, culture and media leaders at the Eureka Prizes Award Dinner at Sydney Town Hall on Wednesday night.

Reproduction research Down Under: koalas and crocodiles, rather than the birds and the bees, to teach us about sex

How do you get sperm from a saltwater crocodile? What can we learn about male infertility and ovarian cancer from hairy-nosed wombats, koalas, and egg-laying mammals?

At the Annual Scientific Meeting of the Endocrine Society of Australia and the Society for Reproductive Biology in Melbourne, held Sunday 23 to Wednesday 26 August, researchers will discuss:

And does infertility predict the future of a male’s health?

And is there evidence it’s making your kids fat?

We’re not doing the media for the conference, but you can get in touch with Rebecca Robker, one of the SRB Program Co-Chairs and Associate Professor at the University of Adelaide, on rebecca.robker@adelaide.edu.au.

Feel free to pass these stories along to colleagues. And between bulletins, you can follow me on Twitter (@scienceinpublic) for more science news and story tips.