The 2014 Nobel Prizes have been announced, and both the physics and chemistry prizes fit neatly with the coming International Year of Light.

Blue light-emitting diodes (LEDs) have opened up a new era in energy-efficient lighting and computer and smartphone displays. They earned the Nobel Prize in Physics for Isamu Akasaki, Hiroshi Amano and Shuji Nakamura. As my Japanese colleagues have proudly indicated, this is also a win for applied physics, with much of the initial work having been done in industry.

The Nobel Prize in Chemistry also went to a team of physicists. Eric Betzig, Stefan W. Hell and William E. Moerner’s microscopy techniques give a resolution better than the diffraction limit of light. And since the announcement, news has emerged of another advance by Eric Betzig in the safe illumination and observation of living cells—more details below.

These Nobel Prize winning technologies are also used at the ARC Centre of Excellence in Advanced Molecular Imaging, which I was pleased to see launched recently. This new Centre brings physicists, chemists and biologists together to change the way we see the immune system and to help tackle cancer, infections and auto-immune diseases.

Congratulations too to all the winners at the 2014 Prime Minister’s Prizes for Science, especially Matthew Hill, winner of the Malcolm McIntosh Prize for Physical Scientist of the Year for his work on nanoporous crystals, and astronomy and physics teacher Geoff McNamara, who won the Prime Minister’s Prize for Excellence in Science Teaching in Secondary Schools. You can read their stories below.

Our annual Women in Physics lecture series continues this month, as Sheila Rowan from the University of Glasgow brings her talks on gravitational wave detection to Western Australia, New South Wales, South Australia and Queensland. With clever use of props, such as a yo-yo, a whistle and ball bearings on a rubber sheet, her lectures engage school students and the public alike.

Another overseas visitor soon to arrive is the influential American theoretical particle physicist, cosmologist and author Lisa Randall. She’ll be one of the key speakers at the 2014 AIP Congress in Canberra in December—you can read more about her below.

Next Thursday is the annual AIP Physics in Industry day, with the theme this year being ‘Physics of the Mind. To get you thinking in advance of the event, we’re featuring an essay by our NSW Branch chair Scott Martin on the possibility and danger of artificial consciousness.

Australian science still faces funding uncertainty following threats to the National Collaborative Research Infrastructure Scheme (NCRIS) and the Future Fellows scholarship program. Science and Technology Australia (STA), of which the AIP is a member, is urging the government not to waste these programs’ valuable investments and opportunities. You can read the STA statement below.

As mentioned in the last newsletter, the AIP’s new Executive Committee will be elected unopposed at our next AGM. This will take place on 2 February 2015—full details are below.

Our Annual General Meeting (AGM) is the occasion on which we make formal decisions for the coming year, including the election of the new Executive Committee.

The only nominations for the Executive, who will be elected unopposed at the meeting, are: 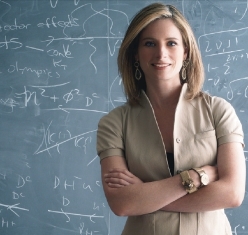 American theoretical physicist Lisa Randall is one of the prominent researchers who’ll be speaking at this year’s AIP Congress (7–11 December in Canberra).

Lisa’s work connects fundamental particles and symmetries with cosmological phenomena like dark matter from inflation, as well as seeking experimental tests of these theories.

Her most prominent achievement is the Randall-Sudrum model, developed with Raman Sudrum, in which our universe is embedded in a five-dimensional warped spacetime.

Lisa regularly appears on radio and TV, and two of her books have made the New York Times list of 100 Notable Books of the Year. And in keeping with the Congress theme of ‘The Art of Physics’, she has written a libretto for an opera and curated art exhibits.

In 2007, Lisa was named one of the 100 Most Influential People by Time Magazine.

Registrations to see Lisa Randall and other speakers at the Congress are now open at aip2014.org.au.

Surviving the singularity: Physics of the Mind

What is consciousness? Can a machine ever become conscious? Should we fear replacement by a digital superintelligence?

In the lead-up to the annual Physics in Industry day, NSW Branch chair Scott Martin considers these questions in an essay on the day’s theme, ‘Physics of the Mind’.

In particular, he looks at the different viewpoints of six guests who will speak on the day, and what they can tell us about the nature of intelligence.

This involves thinking about complex systems and quantum mechanics, as well as where technology is heading now. Can we expect benevolence to emerge, or can we instil it from our own insights?

The NSW AIP Physics in Industry day will be held on Thursday 6 November at CSIRO in Lindfield West. It will be covered by the ABC’s Big Ideas program.

Find out more and register at physics-industry.com.

Earlier this month, the future of Australian research infrastructure and our best and brightest mid-career researchers was cast into doubt after comments by the Minister of Education, Christopher Pyne.

He said that if the government’s higher education reforms are not passed, “the National Collaborative Research Infrastructure Scheme [NCRIS] and the Future Fellows [scholarship program] will end.”

Catriona Jackson, the CEO of peak group Science and Technology Australia (STA)—of which the AIP is a member—responded, “The science community and the general public have had enough of the nation’s knowledge future being tossed about like a political football.”

“Very significant sums have already been invested on behalf of the taxpayer as part of the NCRIS scheme,” she said. “To ditch this vital scheme now would be a terrible waste of taxpayers’ money and of opportunity.”

“The Future Fellows scheme stems the drain of our best and brightest researchers to better resourced nations. Losing the talent—the future science, technology, engineering and maths superstars—that we have nurtured and resourced, just doesn’t make sense.”

You can read more about the government’s statements and the STA’s response at the STA website.

The 2014 Nobel Prize in Physics has been awarded to a trio of applied physicists, Isamu Akasaki, Hiroshi Amano and Shuji Nakamura, for inventing blue light-emitting diodes (LEDs).

These compact, efficient light sources are longer lasting and use much less energy than incandescent bulbs or fluorescent tubes, and are rapidly taking over in domestic and automobile lighting, as well as in computer and smartphone screens.

Although LEDs were first constructed in the 1950s and 1960s, for a long time they were only able to cover the spectrum between infrared and green light.

However, in the late 1980s the development of gallium-nitride semiconductors with high bandgap, and the construction of structures like quantum wells, enabled their extension into blue light, covering the entire visible spectrum.

(Some of this early work on nitride semiconductors was done by Trevor Tansley, Cathy Foley and Scott Butcher at Macquarie University.)

With lighting consuming 20–30% of our electrical energy, the tenfold increase in efficiency of LED lamps stands to greatly reduce our energy needs and our carbon footprint.

An advance in optical microscopy has won the 2014 Nobel Prize in Chemistry for Eric Betzig, Stefan W. Hell and William E. Moerner.

Their technique achieves resolution greater than the diffraction limit—determined by the wavelength of light—by using two overlapping laser beams. The first laser stimulates molecules to fluoresce, while the second suppresses the fluorescence.

Although the size of each beam is determined by the diffraction limit, their overlap can be made arbitrarily small, causing only a fraction of the molecules to fluoresce at once. A complete image can then be made by scanning the entire sample.

Unlike electron microscopes, which require a high vacuum, super-resolution fluorescence microscopes can be used to observe living cells.

Since the award was announced, Eric Betzig has revealed yet another new microscopy technique, using a sheet of light to illuminate only a small part of a specimen at a time. This minimises damage from intense light, allowing living processes to continue while being watched.

You can read about the laureates at the Nobel Prizes website.

Physical science at the PM’s Prizes

Crystals that are the world’s most porous materials have earned Matthew Hill the 2014 Malcolm McIntosh Prize for Physical Scientist of the Year.

An ARC Future Fellow and leader of CSIRO’s Integrated Nanoporous Materials team, Matthew has demonstrated that metal-organic frameworks (MOFs) can used as an efficient and long-lasting filter. Considering that forty per cent of the energy consumed by industry is used to separate things—in natural gas production, mineral processing, food production, pollution control, etc.—their applications are endless.

Appropriately, as the International Year of Crystallography nears its end, the structure of Matthew’s MOFs is examined using X-ray light from the Australian Synchrotron, and their pores measured with positron annihilation lifetime spectroscopy.

‘Mr Mac’, as he is known to his students, has a passion for physics and astronomy, having written three books on gravitational waves, dark matter and pulsars.

He is also looking to spread his message beyond those lucky enough to have been in his classroom, offering his extension program to other schools and working to build an astronomical teaching observatory at the University of Canberra.

You can read about all the winners at industry.gov.au/scienceprizes.

The organisers of PLANCKS (Physics League Across Numerous Countries for Kick-ass Students) are inviting Australian physicists to take part in their international competition.

In the contest, teams of three or four bachelor or masters students compete to solve challenging physics exercises. But as well as competing, the entrants get to meet and share ideas with their colleagues from around the world.

Last year, 31 teams from 14 countries took part in the competition—but there were no Australian entrants! As vice-president Jeroen van Doorn said, “In order to make PLANCKS a real global competition we want to change this for PLANCKS 2015.”

More information, including past exercises, can be found at www.plancks.info.

Sheila Rowan explains how experiments to detect elusive gravitational waves will show us a hidden side of the Universe.

Presentations of postgraduate research, followed by a public lecture by Ragbir Bhathal on 40,000 years of Aboriginal Astronomy.

Detecting gravitational waves on a tabletop

A coin-sized resonant-mass detector built at the University of Western Australia could detect high-frequency gravitational waves.

Dark matter in Milky Way half what was thought

A hollow laser beam built at ANU can attract and repel objects at up to 20 cm.

PULSE@Parkes observations of a flickering neutron star have been published in the Royal Astronomical Society’s journal.

Radio astronomer Nick Seymour part of a team that found the most intense star-forming region of the Universe.

For the first time, an explosion caused by matter pulled into white dwarf star has been tracked by University of Sydney astronomers.

Researchers of University of Sydney use insights from aerospace engineering in quantum technology.

Electronics and photonics on one platform

Researchers at Swinburne show graphene can carry both electrons and electromagnetic waves.

Undergraduate students at Monash University have their paper published in Physical Review Letters.

Why do science graduates have trouble finding jobs when employers report a skills shortage?

No events are currently listed.

The Most Massive Galaxies and their Precursors
9–12 February 2015, Luna Park, Sydney, NSW