Today in Melbourne: re-training the brain to stop tendon pain

A simple, pain-free, drug-free treatment for tendinopathy – a poorly understood condition that’s debilitating for athletes and non-athletes alike – has been developed by a Melbourne researcher.

The treatment combines re-training the brain (which current exercises don’t address, and which may help prevent relapse) with a stationary, weight-bearing exercise.

It’s so far been successful with a wide range of athletes, ranging from football players to ballet dancers.

Are you going to AAAS?

Let me know if you are going to the AAAS in Washington DC in February. We’ll be hosting our annual dinner, and sharing Stories of Australian Science over a glass of Aussie red.

If you or any of your colleagues are attending the conference let me know – we’d love to have you for dinner.

And if you missed Wednesday’s story: putting a window in the hull of an Indonesian ship reveals the true cost of biofouling.

It’s a nice collaboration between Australian and Indonesian scientists, one of many supported by the Australia Indonesia Centre. We’ll have more stories from the Centre in the coming weeks and months, including:

Brain training to give tendon pain the boot 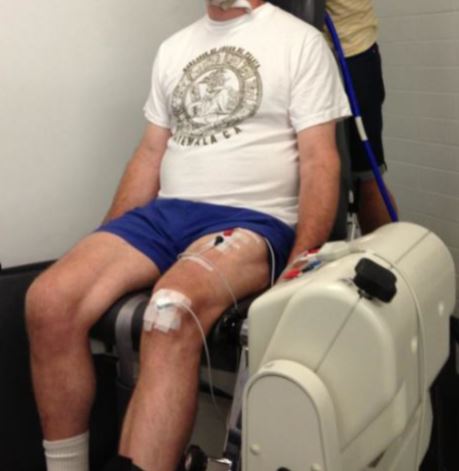 Re-training the brain with painless exercises may be the key to stopping recurring tendon pain, according to Melbourne researchers.

AFL, basketball and netball players are the major sufferers, with tendon pain in the knee debilitating and long-lasting. The injury can sideline a player or cause them to give up the sport entirely.

“More than 50 per cent of people who stop sport because of tendon pain still suffer from that pain 15 years later,” says Dr Ebonie Rio.

“Our simple exercise is revolutionising how we treat tendinopathy.”

The treatment has been successful with a wide range of athletes, ranging from football players to ballet dancers. Among those successfully treated, are:

All are available to testify to the effectiveness of the treatment.

Coined TNT (tendon neuroplastic training), the treatment combines stimulating the brain externally – for example by doing exercises to the sound of a metronome or voice-recording, rather than simply telling patients to hold a pose – with strength training, which is known to be good for tendons and muscles.

Ebonie and colleagues at the Monash University Tendon Research group found that a single, heavy bout of stationary exercise eliminated kneecap tendon pain instantly, lasting for up to 45 minutes. During the exercise, muscles are ‘on’ without being extended, and the joint is kept still – for example holding a weighted leg-extension in one spot.

Unlike movement-based treatments, which increase tendon pain (and so are harder for people to stick to), this is painless, as well as being medication- and-injection-free.
Elite athletes such as the AFL players Ebonie treats can complete TNT during training without worry of muscle fatigue – Ebonie even found the exercises increased muscle strength by 19 per cent immediately afterward.

“People with tendon pain have changes to the way they control their muscles, but our current exercises – and how they’re taught – don’t do enough to address the way the brain talks to muscles.

“This may be part of the reason why tendon pain is so persistent and often comes back.”

But Ebonie says the causes of tendon pain are still unknown, so any insights into the condition are welcomed.

“We have no idea what’s happening at a tendon level with tendon pain. Despite the fact that it can be chronic and persistent, it behaves quite differently to other types of chronic pain – for example back pain – in that it’s very localised within the tendon.”
During the stationary exercises, her team also monitored brain activity and were surprised to find high levels of muscle inhibition.  “It’s as if their brain was trying to limit the use of their quadriceps – the muscles on the front of the thigh,” Ebonie says.

“We didn’t expect to see anywhere near that level of inhibition in people with tendon pain, so that was quite novel.”

After completing her PhD at Monash University, Ebonie has now started postdoctoral studies at the La Trobe Sport and Exercise Medicine Research Centre, where she will test the treatment on other tendons, as well as finding the minimum number of repeats needed to get lasting effects from the exercise.

Fresh Science Victoria was held at Scienceworks (media training), Melbourne Museum (schools forum) and the Kelvin Club (public event) and was supported by Museum Victoria, Bio-Medical Research Victoria and the Office of the Victorian Lead Scientist.